Emanuel Gottlieb Leutze (1816-1868) was an German-American painter. Moving to America as a child, he returned to Germany in adulthood to study and paint. He moved back to America later in life.

Gottlieb's best-known work is one of the most iconic paintings of American history: Washington Crossing the Delaware. Ironically, the main inspiration for this painting seems to have been the European revolutions of 1848 (Gottlieb was in Germany at the time and was a strong supporter of the 1848 revolutions). 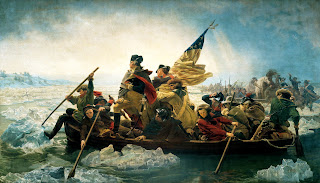 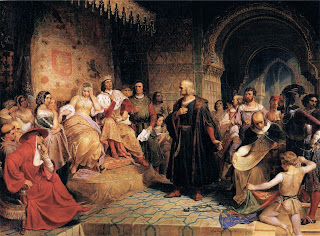 Gottlieb's largest painting was an enormous mural, Westward the Course of Empire Takes Its Way. Measuring 20 x 30 feet, the mural resides in the US House of Representatives. This is an allegorical depiction of America's 19th century "manifest destiny" philosophy, which viewed expansion throughout the North American continent as a natural progression. Gottlieb's notes on the painting are quite revealing as to the symbolism. 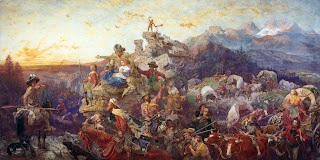 Westward the Course of Empire Takes Its Way (1862)

Gottlieb's painting of Queen Elizabeth I and Sir Walter Raleigh depicts the mythical (i.e., it never happened) event when Raleigh lays down his cloak to allow the queen to cross a mud puddle unmuddied. The myth was replayed in Sir Walter Scott's novel Kenilworth:

"Accordingly, she fixed her keen glance on the youth, as she approached the place where he stood, with a look in which surprise at his boldness seemed to be unmingled with resentment, while a trifling accident happened which attracted her attention towards him yet more strongly. The night had been rainy, and just where the young gentleman stood a small quantity of mud interrupted the Queen's passage. As she hesitated to pass on, the gallant, throwing his cloak from his shoulders, laid it on the miry spot, so as to ensure her stepping over it dry-shod. Elizabeth looked at the young man, who accompanied this act of devoted courtesy with a profound reverence, and a blush that overspread his whole countenance. The Queen was confused, and blushed in her turn, nodded her head, hastily passed on, and embarked in her barge without saying a word." 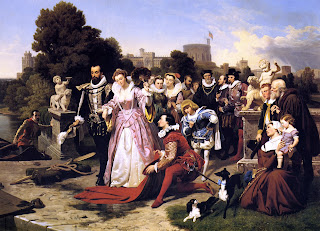 His other painting of Queen Elizabeth I depicts the future queen as a princess after her interrogation in the Tower of London in 1554. The matter involved Elizabeth’s loyalty to the Protestant cause in the face of Queen Mary’s militant Catholicism. Elements such as the statue of the Virgin and Child were occasionally interpreted as evidence of Elizabeth’s religious ambivalence, insinuating that her motives were founded on political rather than spiritual matters. 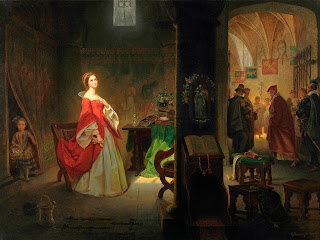 Princess Elizabeth in the Tower (1860)

Gottlieb's other painting of the Tudor era is of Elizabeth I's parents, Henry VIII and Anne Boleyn, during their courtship. Henry's then-queen, Catherine of Aragon (just right of center in the painting), is in many ways the central figure in this painting, which appears to depict her as a sympathetic character who was betrayed and publically humiliated by her husband. 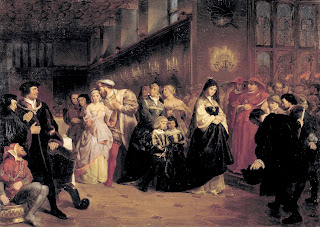 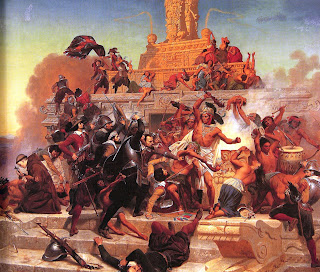 Storming of the Teocalli by Cortez and His Troops (1848) 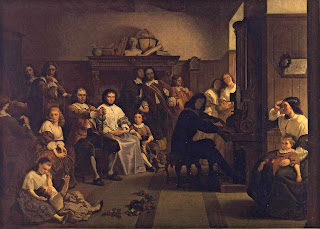 Next is another painting of an incident from the Revolutionary War, Mrs. Schuyler Burning Her Wheat Fields on the Approach of the British. 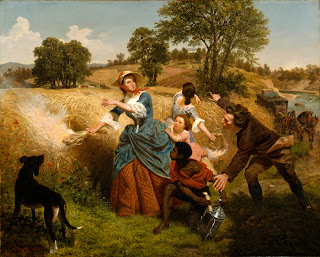 Mrs. Schuyler Burning Her Wheat Fields on the Approach of the British (1852) 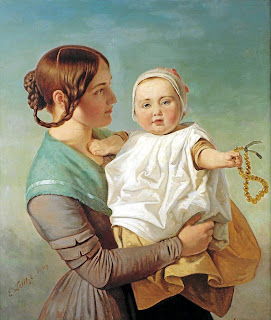